Today we precent this Brandnew "Caradoc" loko
When you ride this loko it"s like riding a Rolls Rroyce like a Rolls this locomotive was also designed and built by a great crafsman.
The price is very good that"s why this is the best Christmas offer!
The loco has recently bee inspected and approved bij lodge "BELL Boilers".
The technical report of the inspection is included ! also full documentation of the construction of this locomotive is included!


“Caradoc” was built as a result of a visit to the English “Moors Valley Railways” where heavy passenger services are driven day in and day out exclusively with the so-called Tinkerbell locomotives.

Caradoc was completed in 2019 and commissioned in 2020. The number of operating hours, including heating, is approximately 20 hours. Stoking "cold" usually takes 1.5 to 2 hours.

The original Tinkerbell was born out of a wager to design and build a 7 ” locomotive that one could sit “in” instead of “on”. This bet was won by Roger Moore in 1968 with his design.
Many so-called “derived” machines have since seen the light. They are particularly suitable for heavier passenger trains due to their robustness and pulling power.

The name “Caradoc” is the name of one of the knights of King Richard's Round Table. An apt name for reliable and always available power for heavy work.

The four shafts are all fitted with closed spherical ball bearing blocks. The front bogie set is resilient and gives a very smooth gait even through very short turns. The whole is designed for a minimum curve radius of 9 meters.

Instead of the highly stressed "Marine type" boiler originally in the design, "Caradoc" has an original steel locomotive boiler, built under Lloyd's approval by "Bell Boilers" and imported from England. The insulation is 12 mm cork with a stainless steel outer jacket. This has resulted in a very high efficiency and excellent insulation values.
A so-called lead nail has been placed in the firebox as a dry-burning protection.

The design of the boiler has been chosen in such a way that the product of Pw x Content is < 200. Under Dutch law, this means that the boiler falls into Category II of the PED. The working pressure is therefore limited to 6.33 Bar. However, the boiler is oversized and suitable for an operating pressure of 8 bar.

The “Walschaerts” steam distribution guarantees a very smooth gait both in “forwards” and “backwards”. The distribution is the same and it is possible to drive in both directions with expansion.

The outside loading bucket sliders are “pressure relieved”. This means that the wear of the sliding part and the load on the drive are reduced to a minimum.

Grease lubrication has been used on all rotating parts as much as possible.
The connecting rods have a spherical bearing on the crank pins and a needle bearing in the crosshead, so that fluctuations are absorbed. When grease lubrication was not possible, sintered bronze bearing bushes and hardened steel shafts were used.

The boiler is powered by three appliances. Firstly, the axle pump placed between the frame. Furthermore, a steam driven feed water pump on the side and thirdly a steam injector. This guarantees more than sufficient power supply capacity. The steam injector has a special control to suck in the feed water.

Two Nabuco safety devices are mounted, which are factory set at 6 and 6.5 bar.
The fire grate is divided into three parts and can be removed via the fire door as well as via the ash pan. The middle part is made of stainless steel.

Brake shoes are fitted on all four drive wheels, which can exert maximum braking force both forwards and backwards. A standstill manual control and a modulating air control are fitted in the cab. For the air there is an air steam pump. Most often an electric air pump is used, which is a 12 volt battery placed under the operator's seat is automatically regulated and maintained at 4 bar.

The driver's house and the two side tanks are made of 2 mm stainless steel AISI 304 sheet material. The coal bunker is installed in the right side tank, so that heating can be continued while driving via the coal hatch in the sitting cabin.

The machine can be assessed while driving.
. 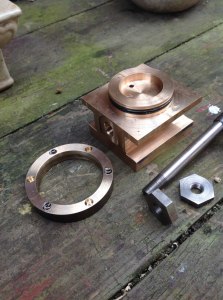 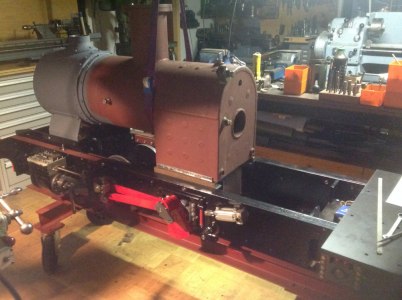 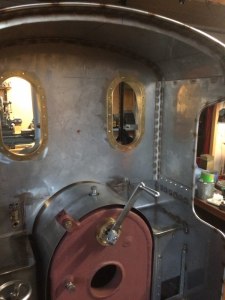 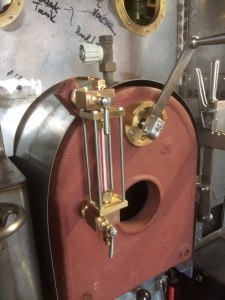 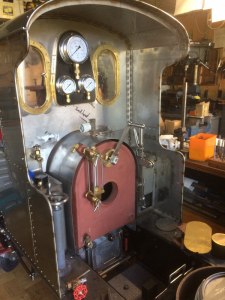 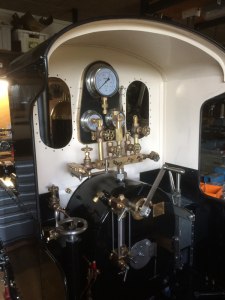 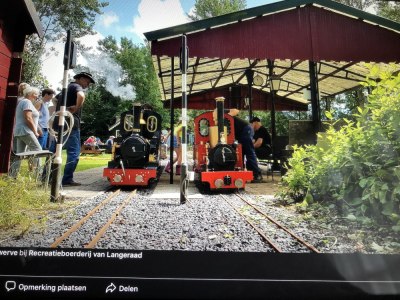 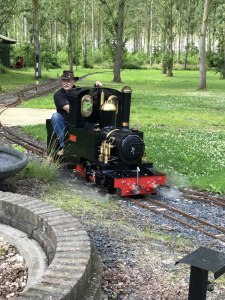 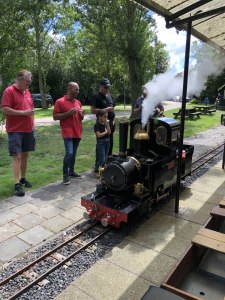